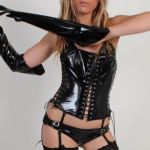 “He saw the triple-X flashing neon sign and pulled over into the parking lot. He needed a drink and some eye candy after the rough week. Maybe he would even get lucky, he thought.
He found a parking space after a few times around the building…it was packed. It must be good if it was this crowded.
He walked into the vestibule to pay the entrance fee and was greeted by a beautiful young woman who smiled widely upon seeing him.
“Oh good. We need more guys in there. You get in free tonight.”
“Cool,” he said smiling back. Free is always good, he thought.
“Just go through that door and to the left and they’ll get you set up.”

“He nodded and walked through the door. It took his eyes a bit to get adjusted to the darkness, but another young woman immediately took him by the arm and said: “Right over here…and remember you aren’t allowed to speak”.
Before he could see anything he was forcibly bent over and locked into a stockade. “It’s for your safety. We need to be sure you can’t reach out.” She told him. “Enjoy!” and walked away.
“What the f…” he tried to mutter…to no avail as he felt something enter his mouth and the strap tied around the back of his head. Immediately other hands were all over him untying his belt, removing his shoes and then stripping him completely from the waist down.
He struggled to free his hands but the stockade was sturdy and now his ankles were shackled wide apart.
The stockade suddenly began moving and he realized it was on wheels and he was being wheeled into a central area where other men were also shackled and bent over in stockades just like he.
He looked around and saw a sea of women smiling, laughing, drinking and enjoying themselves…all of them wore strapons…

If your little ass pussy is quivering right now